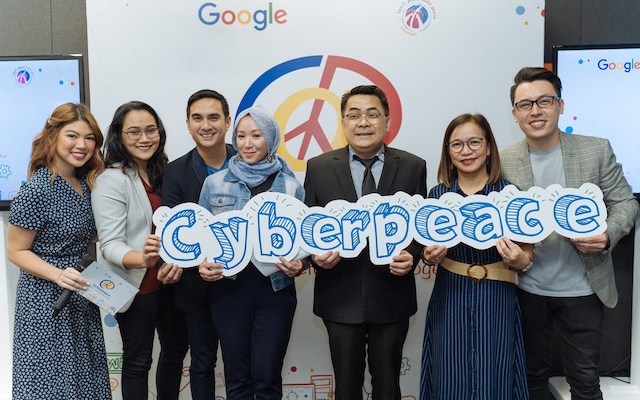 Google is partnering with Teach Peace Build Peace Movement, a non-governmental organization that runs a peace education program for children in conflict and non-conflict zones, and volunteers in implementing Google’s Be Internet Awesome curriculum to high school students in private and public schools nationwide.

“Google is not just about creating the most awesome and magical products,” said Bernadette Nacario, country director, Google Philippines. “We feel that we have a bigger responsibility than that and that includes our responsibility to create a safe and peaceful environment for everyone.”

Citing Google’s Digital Wellbeing of Families report, Nacario said 85% of parents surveyed said they don’t really feel comfortable when their kids are online. These kids are digital natives who have no idea what’s life like without the internet. The threats to child safety are the same the only difference is the change in platform. Before it was in real life, now it’s in the cyberworld.

“Parents are already asking for help and this is the inspiration for us at Google that motivated us to work on this project together with our partners,” said Yves Gonzalez, head of Policy and Government Relations, Google Philippines. “We want to help parents create a safer environment for their family and children. As we launch Cyberpeace, we are creating a peaceful internet together.”

Lqya Maravilla, founder of Team Lyqa and a YouTube EduCreator, at the pilot of Google Philippines’ “Cyberpeace” campaign at the San Francisco National High School.

By encouraging volunteers starting with YouTube creators, teachers, and employees, the Cyberpeace campaign will be going around various schools and teach children on protecting themselves from online threats. It is also hoped to teach them how to be basically nice on the internet.

“As a strong advocate of peace education, we see the Cyberpeace campaign with Google Philippines very significant because children are now faced with a lot of conflicts and violence, both offline and online,” said Bai Rohaniza Sumndad-Usman, founder and chief Peace Mission Keeper at Teach Peace Build Peace Movement.

“We are strongly advocating for this campaign and to have a platform to teach knowledge and way of life that reflect feasible values online, and for our high school learners to foster meaningful connections amidst differences.”

Google, Teach Peace Build Peace, and representatives from the Department of Education held a pilot for the Cyberpeace campaign at the San Francisco National High School in Quezon City.

Marlet Salazar is a technology writer with 20 years of experience in the media industry. She previously worked as a writer at the Philippine Daily Inquirer. Follow @marletds or connect on LinkedIn /marletsalazar/. View all posts by Marlet D. Salazar